D.’s Sandbox Modern City Builder Edition has been released!  D.’s Sandbox is a free open source game inspired by sandbox games such as Terraria, Minecraft and Infiniminer and based on the Minetest engine. This release adds the Modern City Builder subgame so that users can create their own cities. A big thanks to the awesome Minetest developers and Modders for helping make this release possible!

IMPORTANT: The /docsmike folder has links to tutorials for the different mods. Please post any comments or feedback in the forum! I’m very interested in your input and what you like, don’t like, and what you’d like to see added!  These images below are only the tip of the iceberg of what can be created now.  If you create any great screens please feel free to submit them and they may be posted on the site. 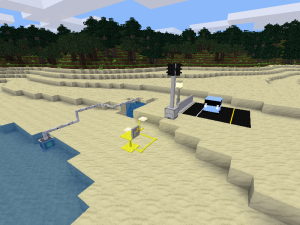 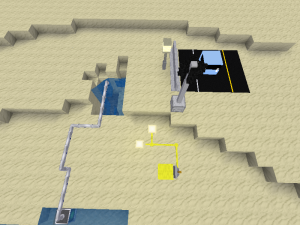 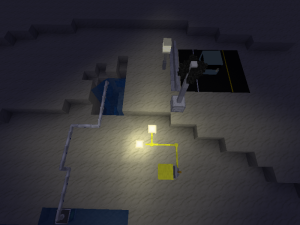 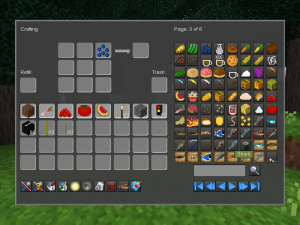 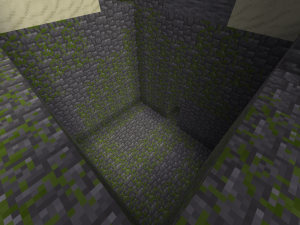 Key Features Of This Release Are In The Modern City Builder Gametype which includes:
* Asphalt, Road signs, traffic lights, etc
* Fishing
* Cars
* Carts and rails
* Wiring and the ability to generate electricity (Referred to as Mesecons)
* Pipes and chutes and the ability to move liquids and solids
* Farming with lots of new fruits and vegetables
* Skin changing (/m to access it)
* Minecarts and some different rails
* New inventory featuring a craft guide and lots more ( aka the Unified Inventory Mod) – I would love feedback on it especially vs the minetest default
* Hunger and Thirst System can be added to a world via the “configure” button
* WorldEdit Mod – A very power world editing tool added to a world via the “configure” button.
* Currency and Shops

Future Goals (some for a non school version):
* Animals such as cows, horses, sheep, etc. Horses will be rideable 🙂
* NPC Traders
* Monsters
* Generated villages and villagers
* Wandering adventuring NPCs that you can hire and/or interact with
* Aviation

I’ve been working on a Modern City Builder Subgame for D.’s Sandbox which will be included in a new test build that I plan to release soon! It includes:
* Asphalt, Road signs, etc
* Cars
* Wiring and the ability to generate electricity
* Pipes and the ability to move liquids
* Farming with lots of new fruits and vegetables
* Skin changing
* Minecarts and some different rails

Also I still am planning on doing some youtube videos explaining about my current goals with D.’s Sandbox and also Sandbox Game Maker. Please feel free to comment about D.’s Sandbox and this post in the forums!

Here is also some D. Art for you to enjoy 🙂 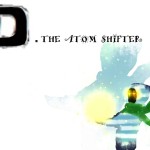 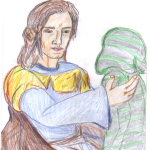 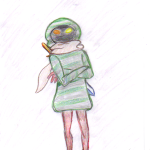 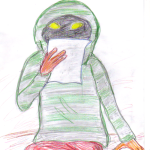 D.’s Sandbox is an open source game based off of Minetest which is similar to Minecraft and Infiniminer.  The goal is for the project to be school friendly but also provide a wealth of fun and creative activities such as Rollercoasters, Fishing, Creative Building, Boating, Race Car Racing, Exploring, Under Water Adventures, Land and Water Life, and much more!

Right now the project will closely resemble Minetest but just like how Sandbox started out I will be slowly adding my own changes. There are lots of things that I think the above games are missing that I plan to add.  Some people may wonder why I am releasing it in such an early state but this way my students can download it at home too.  Minetest is not kid or school friendly which is a problem.  Hopefully others find it useful too!  I also plan to use D.’s Sandbox as the base for D. The Atom Shifter which feature combat, a story, quests, monsters, spells, experience and skills, and lots more!

Enjoy and please let me know what you think in the Sandbox Forums!  Also it should be compatible with all Minetest Mods!  Head over to the Download Page to grab a copy!

Key features:
– New menu logo and gametype logo for D.
– Cleaned up Minetest base to be school friendly
– Mods Mesacar (with a default value that enables it to climb trees and high walls)
– Boost_cart so that carts and rollercoasters can be created
– Minetest skins (/m to bring up the menu to change skins, D. still needs to be added)
– Streets Mod to make realistic roads and racecourses
– Added the Click Me To Start.bat and server.bat (in Bin) to make loading easier
– Currently windows binary only (32 bit)
– Removed the tick box to enable public servers to be viewed (adults can change it but it’d be bad for school kids to go on public servers) Private/school servers can still be hosted.

Over the next few days I will be posting more information about my plans for D.’s Sandbox and hopefully a video too about why I’ve picked it and its differences with Sandbox and all that good stuff.

Take care and I hope you enjoy it! 🙂
-Mike

I need to work on updating on this page more often, but I have been updating on the Sandbox Game Maker Facebook Page. There is are so many updates that I’m going to summarize them and then go into a bit more detail below. Please feel free to comment on this news post on our forum.

– The forums and wiki are back online!
– I will be cleaning up the forums and webpage for better organization
– The MOST EXCITING thing is that I have been messing around with a free open source minecraft like game called minetest and I plan on using it as a new version of Sandbox tentatively named SandCraft! Please read below for more information.
– An awesome kid friendly teaser video for D. The Atom Shifter by Christian!

There is so much I hardly know where to start! First sorry the forums and wiki were down for a bit!! My webhost updated the version of php and it broke them but I finally was able to properly update both of them after some unfun battles. I still have some work to do but at least they are functioning.

I’m super excited with my testing of minetest! I have already started working on a “school edition” which will have a lot of extra features over default minetest but still be appropriate for schools. I’m using it in my own school so it will be great to share it with the public! I also do plan on doing a commercial version for maybe $1-$2 to get improved graphics and textures, monsters and AI, quests, skills, and lots more! I plan to use that to create the D. The Atom Shifter game as well 🙂 The great thing about the engine is that Sandbox can actually be used to create structures for SandCraft and it is not restricted to blocks, it can handle complex models as well. It also features Lua scripting which is something I’ve wanted in Sandbox for a long time. Minetest/SandCraft has a modding API which minecraft has said for years now that they would add but haven’t. I’m hoping with the commercial version that I can give back to the minetest developers as well and motive them to help improve the engine even more 🙂 I’m hoping to release a very rough version in the next week or two for everyone to test out.

So some people might be wondering, what about Sandbox? My goal with Sandbox itself is to focus it more as a level editor. People are still more than welcome to develop games on it but honestly I lack the coding ability to help much more on that end. I still would like to do a Sandbox Pro at some point and I have a version to release at some point based on Hirato’s work that features widgets while editing and much improved lighting.

How awesome is that video by Christian? He has just finished up his animation degree so we are planning to do lots more D. The Atom Shifter videos! Our goal is to eventually do a short movie so I have been already doing a lot of writing. You can keep up to date on the D. The Atom Shifter Facebook Page. As a warning some content might not be kid friendly.

So there you have it! Lots of updates and lots more to come! I am working on a roadmap and feature list for SandCraft and I will be super interested in feedback. I will be creating an experimental branch as well for people who want to help me test. Thanks so much as always for your continued support! I hope everyone has an awesome holiday season 🙂 Take care!
-Mike

I have some fantastic news! It looks like that I will be getting a chance to teach with Sandbox at the school I am working at. What this means is that I will have much more time to get to work on Sandbox and push out updates! I haven’t completely decided what codebase I want to go with since there is 2.7, 2.8, Master Chef, etc. My thoughts are to focus on Sandbox being more of an easy to use level editor vs trying to stress myself out about making it a game maker for all these different modes. Eventually if the pro version works out I can certainly add more gameplay features but I think Sandbox would be a great level editor for engines such as Unity. I will most likely be doing a poll in the near future on the forums asking what everyone’s favorite versions of Sandbox are and why. Thank you for all of your patience and I’m excited to get to be creating again! There is also a lot of progress on D. The Atom Shifter 🙂