Platinum Arts Sandbox Game Maker is a free open source easy to use standalone 3D Game Maker and 3D Game Design program currently based on the cube 2 engine being used in many schools throughout the world that allows kids and adults to create their own video games, worlds, levels, adventures and quests, even cooperatively! The goal is to make it accessible to kids but also powerful enough for full game projects. With a simple click and roll of a mouse wheel users can modify the world however they want. In the words of Margaret, a nine year old Sandbox whiz I babysit for, “Press Edit and go fulfill your dreams!”. Now features new game modes such as Water Gun Wars Game and FPS Creator, sidescroller, kartmode, RPG Maker, and more!

D.’s Sandbox is an open source game based off of Minetest which is similar to Minecraft and Infiniminer.  The goal is for the project to be school friend but also provide a wealth of fun and creative activities such as Rollercoasters, Fishing, Creative Building, Boating, Race Car Racing, Exploring, Under Water Adventures, Land and Water Life, and much more!  Essentially I will be adding little by little what I think is missing in all of the games mentioned above.  I will be using this with my students so just like how Sandbox Game Maker started, I figured other people might enjoy my changes as well and the rest is history.

If you prefer video check out our tutorial video

Educators this is a letter from a former student that I think says better than I ever could how valuable using Sandbox Game Maker can be!

The Mission: The mission of Sandbox is to make it as easy as possible for kids and adults to make their own games and worlds. The idea is that if we make it easy enough for kids to use, hopefully it will be easy enough for adults as well.

The Story: A few years ago I worked for the YMCA as a before and afterschool site director at a K-5 Elementary School. The YMCA was getting rid of computers so I adopted them into my program. I had some nice programs for them, but I really wanted them to be able to have more freedom to create. I have a background in game design so I decided to start a project to make it easy for them to create their own worlds, stories and movies. Then I decided it might be a nice idea to release it on the internet and now several years later Platinum Arts Sandbox Free 3D Game Maker is steamrolling ahead and being used in many many schools and making many kids all over the world happy!

Presented at: PBS/WHMT Games In Education Conference
* Voted one of the top 100 projects of 08 at moddb.com out of over five thousand.
* Total PC Gaming Magazine February 2009
* PCFormat Magazine (Feb 2009?)
* Featured/Presented at: Ableconf, LinuxConf, Vienna Game Conference
* Featured in a software package that went out to 500 German Schools
* Scheduled for inclusion into Debian, Edubuntu, and Ubuntu
* Used by many teachers throughout the world in their classrooms including the USA, Canada, Mexico, Malaysia, Great Britian, Germany, and many more!

Platinum Arts Sandbox Game Maker Main Features:
* Kid Friendly, Free and Open Source.
* Editing is done in game, including cooperatively over the Internet or LAN.
* Easy enough for kids to use but powerful enough for full game projects.
* Several different modes, including cart, sidescroller, movie (machinima) and RPG
* Several custom maps that feature saving a princess, mazes, houses, quests, etc
* The pursuit of making it as easy as possible to add map features and content.

Why Should Kids And Schools Use Sandbox?
* Kids are free to express their creativity in creating 3D worlds, quests, characters, and more.
* Lots of content already available such as animals, trees, characters, and objects that can easily placed.
* Many school subjects are covered such as Art, Math, English, Earth Science, Physics, CAD, Programming C++, etc.
* Through Moviecube kids are able to create their own movies and stories.
*Teamwork is promoted through cooperative editing and map creation.

Why Should Designers Use Sandbox?
* More user friendly and stable than typical game design software. Everything is done in game, no compiling required.
* Being open source means full access to the engine code. The sky is the limit as far as new features that can be added.
* Lots of content and code already included to save time and effort on the creation process.
* Very supportive and friendly community. 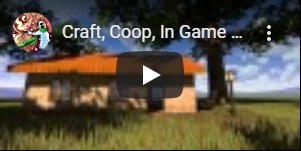